Fes day trip: Plan your tour with Morocco itinerary and get the best of Morocco day trips and tours that are built specifically to meet your needs.
Enjoy Mountains, lush valleys, lakes and forest that will change your point of view of Moroccan nature and beauty.

The Archaeological site of Volubilis is located in one hour drive from Fes and 40 min from Meknes. It is a Roman and Berber ancient town and it is considered the capital of the kingdom of Mauretania. You start the day trip after breakfast and head toward the site where you take a guided visit. The site is divided into public and private buildings
You will have good informative guides to explain about all the excavated places of the site such as mosaics, arches, temples, gates and so on.

Later on, we drive to Meknes for lunch. Meknes is another Moroccan imperial city beside Fes, Marrakech and Rabat. It is the capital of Morocco during the reign of Sultan Moulay Ismail (17 century). You will drive to see the huge walls that surround the city, the main gate of Bab Mansour, the Mausoleum of the Sultan and the medina of Meknes.
After an active journey, you’ll back to Fes and dropped off at the hotel. 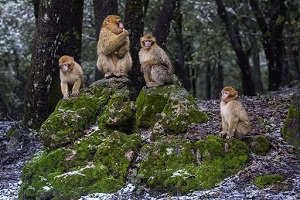 The purpose of this excursion is to escape from the busy life of the medina in Fes and enjoy peaceful areas in the middle Atlas Mountains. We depart from the hotel to see one of the famous natural lakes in the National Park of Ifrane. The lake is calle Dayat Aaoua and it’s just an hour drive from Fes. Later on we continue to Ifrane. A summer resort town in the middle Atlas Mountains, and characterized by its sharp roofs designed against the snowy winter. The town is nickname the Switzerland of Africa and it has a famous private university calle Al akhawayn.

We move to the next town of Azrou which is known for the wood sculpture. After that, a short tour of Azrou and having lunch, we head the Cedar forest that stretches to the South of the town where the Monkeys of the Atlas live. They are tailless apes who live in small groups. After pictures and a light hike amid the trees, we drive back via the forest and Imouzer town to Fes. Drop of at the hotel.

Please, be happy to contact us by filling this chart, and we will be glad to come back as soon as possible